Dispute resolution has been our passion and a core practice area for more than 20 years. Over this time, we have dealt with the most complex and profound domestic and cross-border disputes in the Ukrainian market.

We are one of the biggest teams in Ukraine comprising over 25 litigators.

Our team has an extensive experience of pursuing legal proceedings to defend major companies in complex trans-border disputes.

We devote a considerable part of our practice to representing clients in administrative procedures.

Many cases we have been involved in have become precedents that have changed the way of doing business in different industries to the benefit of our clients.

We strive not only to win a case in courts but also to ensure actual execution of judgments. Our experts advise our clients not only on legal prospects of a legal action but also on the likelihood of actual asset recovery. Therefore, we have one of the best success records in terms of actually executed judgments.

Our reach expands beyond Ukraine through our offices in Belgium, the U.S. and UK, as well as further globally through the networks of Lex Mundi and World Services Group. 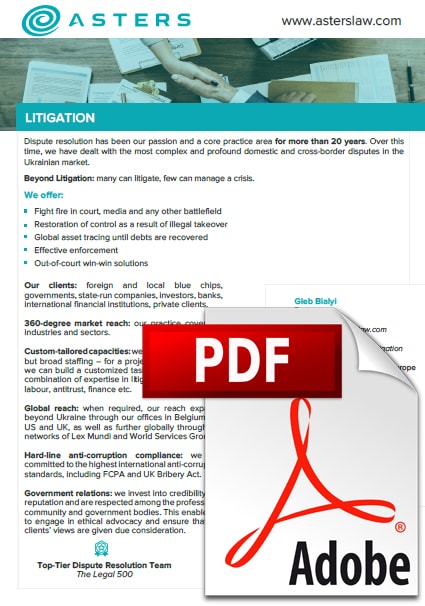 We regularly represent major international and local companies across wide range of industries in disputes of any dimension, including, amongst others:

Featured services:
Publications
Dispute resolution in IT industry in Ukraine Digital transformation of litigation process in Ukraine
Dispute resolution in IT industry in Ukraine Digital transformation of litigation process in Ukraine Q&A session "Commercial and administrative disputes: the attorney's work of a lawyer in the 1st instance court" with Anton Sintsov and Roman Gerasymenko Litigation and enforcement in Ukraine: overview Factoring vs cession: court practice in Ukraine Interview of Andriy Pozhidayev on the disputes of Privatbank with its former owners Asters defends Dr. Anders Aslund in defamation action brought by Igor Kolomoisky Changes in procedural legislation in Ukraine in 2020/2021 How to enforce an arbitral award against a Ukrainian company going bankrupt Asters defends PrivatBank in dispute worth over UAH 7.5 billion before Supreme Court Judicial reforms in Ukraine: analysis of results and expectations Interview of Tetiana Tyshchenko to Legal Practice weekly Legal nuances of securing a claim in Ukraine Introduction of "cassation filters" in Ukraine Defense of LLCs in Ukrainian courts Novelties of procedural legislation in Ukraine Res judicata principle in Ukrainian courts New rules for prolongation and renewal of procedural deadlines in Ukraine Access to Justice in Commercial Disputes Through the Lens of Recent Legislative Innovations Top 5 most interested new bankruptcy-related court cases in Ukraine Representation institute in commercial litigation in Ukraine Abuse of procedural rights How to inherit a land plot automatically upon inheritance of a building located there? Court hearings via videoconferences in Ukraine Appeal of court decisions in bankruptcy procedure in Ukraine Ukraine allows online court hearings due to COVID-19 outbreak The Supreme Court recognized SMS with a subpoena as improper notification of a case participant COVID-19 in Ukraine: major changes in legal proceedings and limitation periods in family disputes (UA version) COVID-19 in Ukraine: amendments to Commercial and Civil Codes Sending the cassation complaint by email (UA version) Establishing a fact of force majeure in Ukraine due to COVID-19 outbreak (UA version) Court decisions appeal issues in bankruptcy proceedings Supreme Court reform in Ukraine Self-representation of a legal entity: how to confirm your authority in court The right of legal entities to bring an action in the ECHR Use of electronic evidence: foreign practice First cases of the High Anticorruption Court in Ukraine Procedural abuse: new trends and ways to combat them The principle of competitiveness in litigation in Ukraine Pros and cons of new initiatives on judicial system reform in Ukraine Unilateral termination of the commercial real estate lease contract Nord Stream-2 vs. EU arbitration case: latest updates Top Antitrust Litigation Cases in Ukraine in 2018-2019 Trade investigations in Ukraine: Can business challenge the results in courts? Ukrainian court allows British investor to secure partial recognition and enforcement of UNCITRAL arbitration award against Ukraine TOP 5 most important court decisions in tax disputes in Ukraine in 2019 Ukrainian court confirms enforceability of UNCITRAL award rendered against Russian Federation Reimbursement of legal services costs in civil proceedings Practical use of the new procedural codes in the Ukrainian courts SCC partial award recognised and enforced in Ukraine despite allegations of public policy violations and noncompliance Pros and cons of the new Commercial Procedural Code Asters Counsel Dmytro Shemelin admitted as a Solicitor of England and Wales How to prevent abuse of procedural rights Legal certainty: the basic principles and practice of the European Court Counter collateral claims in IP disputes in Ukraine Judicial reform in Ukraine: what else should be done? Equitable estoppel principle in the Supreme Court cases Advance payment for bailiffs is illegal in Ukraine Asters wins Ukraine Law Firm of the Year Award from Benchmark Litigation Europe 2019 GDPR a year later: case studies from Google and Microsoft and lessons for Ukraine Reward for private bailiffs in Ukraine Electronic evidence in court in Ukraine Enforcement of court decisions on alimony in Ukraine The Supreme Court's new approaches to corporate disputes Results of the year with the new Code of Administrative Proceedings of Ukraine Main trends in Ukrainian litigation practice for 2019 Litigation and enforcement in Ukraine: overview Quinn Emanuel Urquhart & Sullivan LLP and Asters score for Oschadbank in a USD 1.3 billion investment claim Asters defends interests of PrivatBank in dispute worth over UAH 2 billion before Supreme Court Asters acts as local Ukrainian counsel for Ukraine in $3bn Eurobond dispute with Russia Ukraine: the Supreme Court Grand Chamber affirms the right to "unlimited" compensation for wrongful termination Asters defends interests of PrivatBank before the Supreme Court of Ukraine in disputes worth over UAH 5 billion Ukraine: the difference between employees and independent contractors in focus of the Supreme Court Asters promotes Oksana Legka to a counsel position in the firm’s Dispute Resolution practice Asters becomes General Partner of the Eastern European Dispute Resolution Forum 2017 in Minsk Asters experts joined the GIAC list of recommended arbitrators Asters participates in oral hearing of the investment claim brought by Oschadbank in relation to its investments in Crimea Asters successfully defended a client in an alleged cartel collusion case Dmytro Shemelin joins Asters as Counsel Asters Counsel speaks at the EEDRF Asters acts as a local Ukrainian counsel in the matter related to protection of JSC Oschadbank's investments in Crimea Asters is supporting the Eastern European Dispute Resolution Forum Asters has been recognized as a top-tier law firm by The Legal 500 EMEA 2016 Guide Oleksiy Didkovskiy Wins 2014 ILO Client Choice Award for Litigation Asters Successfully Represents Nidera in Debt Collection Dispute Asters Contributes to the Dispute Resolution Seminar Organized by Herbert Smith in Kyiv Asters inputs in the 1st Ukrainian International Dispute Resolution Conference Yaroslav Petrov represents Asters at the international conferences dedicated to investment in Ukrainian mining and dispute resolution in the CIS Asters' Managing Partner Oleksiy Didkovskiy Shares Litigation Experience at the London Forum Iryna Nazarova Speaks at a Roundtable Discussion on Dispute Resolution in Ukraine
View all Hide
This site uses cookies to offer you better browsing experience.
READ MORE