A timely and efficient advice on a conflict resolution helps (i) save time, tangible and moral resources, and (ii) have the conflict resolved in the best interests of parties without letting it boil over.

Private, flexible, voluntaryand efficient ADR proceeding is a perfect and reasonable choice in business disputes of all kinds.

Asters' role: we act as a neutral third party that works with the parties (i) to build constructive cooperation, (ii) to help parties have their conflict resolved impartially, and (iii) to find mutually acceptable solutions to controversies.

We offer a wide variety of approaches to have conflicts settled, namely:

1) negotiations between parties and representatives
2) facilitation – collective solution of the problem
3) mediation
4) GR – negotiations with local and central authorities, as well as international institutions

The team participates in drafting the legal landscape of alternative dispute resolution, including (i) development of the Law of Ukraine "On Mediation", (ii) signing of the Singapore Convention by Ukraine.

GR: investing into credibility and reputation, we are respected among government agencies and international institutions, which allows us to effectively address client issues.

Individual approach: for a project of any dimension, we build a customized task force with the right combination of transactional and regulatory expertise.

Together with the largest international companies, Asters is one of the founding signatories of ADR pledge 21st century – a statement on the use of alternative dispute resolution at the International Institute for Conflict Prevention and Resolution.

Asters is a part of a worldwide network of companies (including BP, DuPont, General Electric Company, IBM, Microsoft Corporation) that use a civilized approach to conflict resolution. 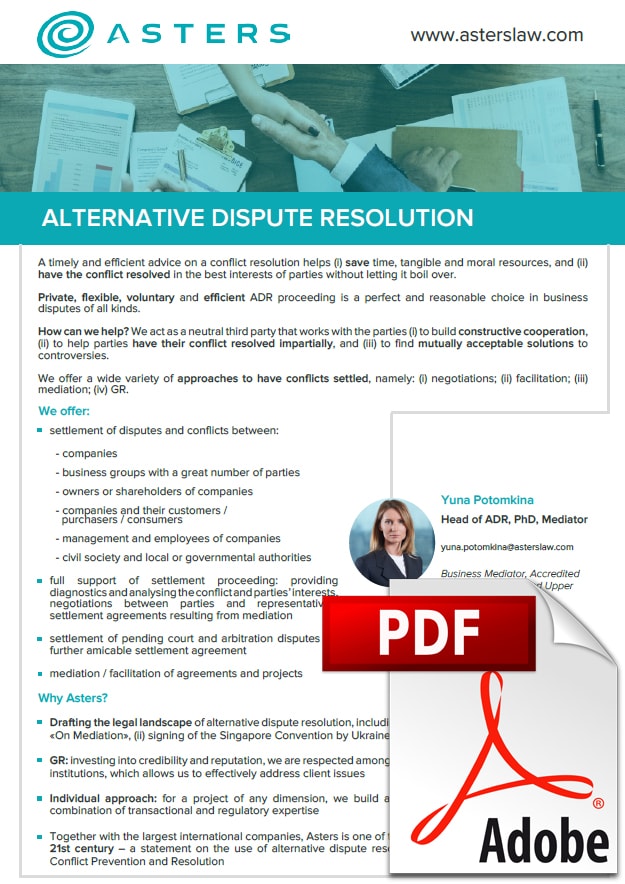 - business groups with a great number of parties

- owners or shareholders of companies

- companies and their customers / purchasers / consumers

- management and employees of companies