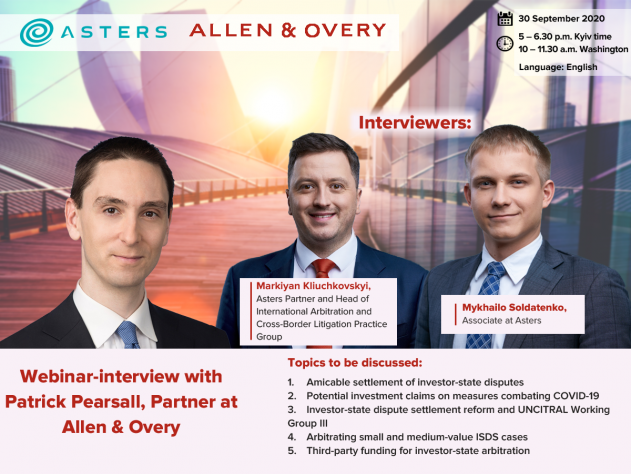 Asters invites you to join a webinar-interview with Patrick Pearsall, a prominent practitioner in the field of international arbitration and public international law.

Patrick is a partner at Allen & Overy in Washington, DC. He leads the Practitioner Group in the UNCITRAL Working Group III process on the ISDS reform and is a co-chair of the IBA Investment Treaty Arbitration Subcommittee.

He previously served at the U.S. Department of State for nearly a decade and departed as a Chief of Investment Arbitration. In his time there, he was involved in the negotiation of a number of major international instruments, including the Trans Pacific Partnership (TPP), the U.S. China Bilateral Investment Treaty, and the Transatlantic Trade and Investment Partnership. Patrick concluded his time at the State Department with the successful defense of a USD15bn treaty claim against the U.S.

He has received several awards and serves on multiple boards. He is band ranked in Chambers, recommended in the Legal 500, and the youngest person ever listed as a “Global Leader” in the peer ranked Who’s Who Legal: Arbitration, where he is recognized as “an incredible advocate”,“whose razor-sharp mind is unmatched” and who is a “leader in public international law and investment treaty arbitration.”

The list of topics to be discussed will include, among other things:

The interview will be held via Zoom by Asters Partner and Head of International Arbitration and Cross-Border Litigation Practice Group Markiyan Kliuchkovskyi and Associate Mykhailo Soldatenko. The event participants will have a possibility to join the discussion and ask their questions.

The participation is free of charge upon registration >>