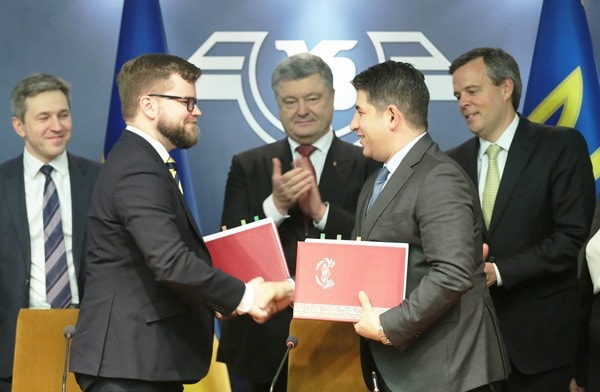 Asters acted as a legal counsel to GE Transportation, a division of the General Electric Company, in connection with a USD 1 billion Framework Agreement with Ukrzaliznytsia, the country’s state-owned rail transport company.

The agreement, which is the largest ever for GE in the country, includes the supply of 30 GE Evolution Series freight locomotives to Ukrzaliznytsia and envisions further delivery of additional locomotive kits over the next decade, as well as the rehabilitation of locomotives in the railway’s legacy fleet and long-term maintenance services.

Asters advised GE Transportation on the execution together with the State Export-Import Bank of Ukraine (Ukreximbank) for the purchase and sale agreement of the first 30 locomotives and their subsequent transfer to Ukrzaliznytsia under a financial leasing agreement.

“This deal demonstrates our expanding global customer base and is a promising step forward in our relationship with Ukrainian Railways, which can serve as a catalyst in attracting international financing and accelerating economic growth in Ukraine,” said Rafael Santana, President & CEO of GE Transportation.

GE Transportation is a division of the General Electric Company, a global technology leader and supplier of equipment, services and solutions to the rail, mining, marine, stationary power and drilling industries. GE Transportation is headquartered in Chicago, IL, and employs approximately 9,000 employees worldwide.

Asters is a full-service independent national law firm that has maintained a strong presence in Ukraine since 1995. Asters has extensive industry-specific experience and plays a leading role in advising clients in various market sectors. The Firm has consistently remained at the top of the Ukrainian legal market throughout its history. It is acknowledged as the Law Firm of the Decade by Ukraine's Legal Awards 2016.The Firm is also a two-time winner of the Law Firm of the Year: Ukraine and the CIS award (The Lawyer European Awards 2014 and 2015) and holds top positions in the most authoritative international and Ukrainian market reviews: The Legal 500, Chambers Global and Chambers Europe, IFLR 1000, Who's Who Legal, Best Lawyers, Expert Guides, and Top 50 Law Firms Annual National Ranking.