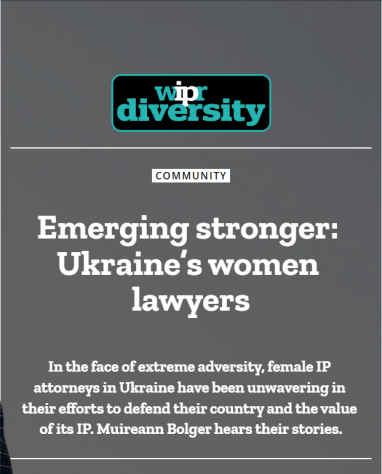 The morning of February 24 began as an ordinary day for IP attorneys Julia Semeniy and Yuliya Prokhoda, with planned court hearings, client meetings and routine school runs in Ukraine.

But when Russia began its onslaught on the country, in an act of internationally condemned aggression, their lives changed dramatically.

Speaking from Kyiv, Prokhoda, CEO, patent and trademark attorney at Intels IP, outlines the tumultuous events that have upended her life and placed her family in constant danger.

“From that day in February, we were subjected to massive shellings, missiles, bombs throughout all of Ukraine. And now we still face missiles here in Kyiv: nobody can predict when the next missiles will arrive,” she says.

The war represents the biggest threat to peace and security in Europe since the end of the Cold War and has created a humanitarian disaster, killing thousands and forcing millions from their homes.

According to the United Nations Office for the Coordination of Humanitarian Affairs (OCHA), more than seven million refugees had fled Ukraine by the end of May, of which around 90% were women and children. The conflict has also set the global economy on a course of slower growth and rising inflation, at critical levels not seen since the 1970s.

A spirit of endurance

For Prokhoda, the outbreak of war has dealt severe personal blows. When Russia invaded, her husband was on a business trip in Eastern Ukraine, where he decided to join the army and he now continues to fight. To the devastation of Prokhoda’s daughter, Oksana, her son-in-law, a finance student aged just 20, also joined the army and was critically injured in a Russian attack.

“He’s in hospital in a deep coma and on a ventilator with a serious brain stem injury. We are there with him daily. And we still have no prognosis for his future; every day he is struggling for his life. It is a terrible time for us, and especially so for Oksana,” she says. “I just don’t understand how this could happen in Ukraine in the 21st century.”

Despite this adversity and heavy toll, she has carried on working, sometimes in unimaginably difficult circumstances.

“We continue our regular work and have done our best to respect IP deadlines, even if air sirens sound every hour, day and night,” she says.

“Just the other day, I was in a court hearing, and there was an air siren that stopped the proceedings. Together with the judges, we went to the shelter while the danger posed by the missiles continued. Afterwards, we returned and carried on. And sometimes that can happen three or four times per hearing, it depends.”

On another harrowing occasion, a missile hit the building next to the hospital where her son-in-law was being treated, causing numerous fatalities.

“I was sitting with my daughter in the hospital for three days with our boy, during which we were assailed by missiles with awful consequences,” recalls Prokhoda. “There were six victims and a lot of young people were injured. But we stayed on with him in the hospital because he cannot be moved, and we had few defences against another strike.”

Semeniy, who is a partner at Asters IP, has also faced stark challenges. After the invasion, she made the tough choice to leave her country and relocate to Croatia, with her eight-year-old son.

By doing so, she left behind many members of her family, including her elderly father who chose to continue working in Ukraine. “There are complications and challenges for those who have left,” she reflects, adding that the experience has been especially tough for her young son.

“It has been a traumatic time. He has been forced to encounter completely new people in an entirely different place, where he has no friends. It is very difficult.”

Both women are board members of the National Association of Patent Attorneys (NAPA) in Ukraine, and they are continuously vocal in rallying international support against the Russian invasion.

Starting from the second day of the war, they explain, NAPA began to help Ukrainians with their relocation within the country and abroad, as well as to help defence forces with food, medicines, and other essential supplies.

“We sent a lot of letters to IP professional associations in order to explain to them the situation in Ukraine and to ask for support: only unanimous condemnation and sanctions against Russia may save the world from the aggressive intentions of Putin, and opening doors for World War III,” explains Prokhoda.

The board is female-led, somewhat of an anomaly in the traditionally patriarchal society in Ukraine. According to collected research before the war, women remained underrepresented throughout Ukrainian society.

A 2021 OCHA report, “Gender Equality and Women’s Empowerment in Ukraine”, noted that despite the ratification of most global conventions, and the adoption of relevant legislation, Ukrainian women “continue to face barriers to their meaningful economic, civic and political participation”.

These gender inequalities have been compounded by the humanitarian crisis caused by Russia’s full-scale invasion of Ukraine this year, noted a July 2022 update to the report.

While Semeniy acknowledges the traditional dearth of gender diversity at senior levels in Ukrainian society, she does emphasise that progress was being made before the war— largely due to the changes precipitated by the pandemic.

“The COVID-19 pandemic enabled many more women to work remotely. And it was a huge step towards greater diversity in law, and specifically in terms of gender diversity. Because of that, more women were able to combine the roles of caring for their families and working as well as carrying out everyday errands. So that was progress.”

And as so often in war, women have had to step into previously male-dominated roles, and Ukraine is no different.

“A lot of men have joined the Ukrainian army to protect our homeland. And it means that women have taken their positions. Women were ready to take on even more responsibility, even more obligations than they had before,” reflects Prokhoda.

She goes on to describe the emergence of a female-dominated NAPA board as a “happy accident”, and is “proud of the role” that the organisation is playing in furthering Ukraine’s interests.

So what lessons have been learned around the greater role played by women during this extremely difficult chapter of the country’s history?

“There are a lot, but the most important one is that we can do so much,” says Semeniy. “Nobody is able to restrict us. We can overcome obstacles, we can not only survive but take this time to learn and to achieve something new during these difficult days.”

For example, both are acutely aware of the need to rebuild the Ukrainian economy, once the war is over. “We understand that we will need to rebuild our country and save our economic independence. In IP, we are trying to sustain what we had before,” explains Prokhoda.

“We have seen increased demand from Ukrainian companies, as more are now thinking more about diversifying their business and switching their businesses to Europe. That means that they will need protection in Europe and in other countries around the world.”

In another positive move, they were both instrumental in arranging for the International Trademark Association (INTA)’s trademark application in Ukraine, for the word ‘INTA’, in classes 9, 35, 41, and 45, covering INTA’s association services, educational activities, and advocacy outreach initiatives.

Semeniy was appointed to file the trademark application on behalf of INTA, aimed at highlighting that Ukraine is still a “viable” country to file and do business.

“It was a great honour,” she reflects modestly, and adds that she is hopeful of more collaboration with the association in the future to further promote Ukraine.

“We discussed cooperation in other spheres, such as new opportunities for Ukrainian IP professionals,” says Semeniy, who adds that Ukraine’s bid to join the European Union (EU) could see further promising developments.

“We are hopeful of more reforms in the IP sphere, and that our candidacy for EU membership will facilitate this development. This would mean that our laws will become harmonised with European ones, and that will allow us to collaborate with international IP colleagues.”

Prokhoda is also determined to strengthen Ukraine’s IP tools, so that the country is fully primed for recovery and growth once the conflict ends.

“We want to develop new products, for example, many countries in Africa consume a great deal of grain, mainly from Ukraine. And their people were in danger of going hungry when Russia blocked Ukrainian ports,” she explains.

“I am confident that the industry will provide new solutions to prevent such scenarios and technologies that will contribute to the future economic success of Ukraine. Nobody can innovate without IP and we need to preserve and develop it.”

After serving as a national expert on the EU Project, “Support of Development of GI system in Ukraine”, she views geographical indications (GIs) as one of the quickest ways to achieve future IP growth.

“I’m very proud of my work on Ukrainian GIs over the past five years. And I now know many domestic producers, their potential and how they could bring more unique products to the market and offer something purely Ukrainian. So that is an exciting future prospect.”

But for now, Prokhoda is taking every day as it comes. “Today our nation is united as never before, even if some of us now live in subways for safety reasons, and have lost our homes to bombs,” she says. “Our country will survive this, and we will emerge stronger.”