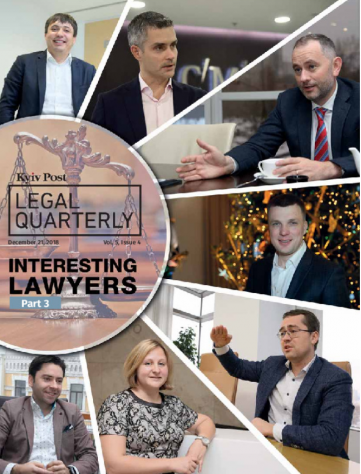 Constantin Solyar: The state decided to attack those who pay their taxes

There’s nothing that can’t be explained about tax law — or so Constantin Solyar believes.

A partner at Kyiv-based law firm Asters, Solyar starts his explanations with easy examples, as if introducing the idea of taxes to a child for the first time.

“Take a small-town fireman, who does a full-time job, saving people’s lives and property,” he says. “The fireman needs to provide for his family as well, and he’s paid a salary.”

But where does the money for the fireman’s salary come from? He’s not doing labor or providing a service that generates wealth — although he’s certainly saving it. In a small town, that money will come from local taxation, Solyar says.

“I could be more specific with a teenager, saying that its not only tax collection, but also tax administration that is important,” he adds. He points to well-administered tax environments, like the one in Luxembourg, where he used to work: “There, you can feel the effect of every euro paid in taxes.”

Another topic that could be understood by teenagers is offshore accounts and tax havens, says Solyar. He employs the example most young people could relate too — of a young pop singer.

Success and fame bring money, and with that come worries, and tax problems, Solyar says.

“Stars don’t have the luxury of living the life of an ordinary person,” he says. They become afraid of the paparazzi, fraudsters, and the like. One way they see protection “is to park their money in places where its confidentiality will be guaranteed.” Off-shore accounts, in other words.

That’s obviously not fair, and as Solyar learned at Harvard Law School, “the cornerstone of taxation is justice.” Another function of the tax system is not only to pay for non-wealth-generating services, but to redistribute wealth, as people are born in different circumstances, some with more advantages than others. Fair taxation makes life fairer for everyone.

“Taller people can easily peek over the fence of a stadium to watch a game for free,” says Solyar, while smaller people need something to stand on.

The same applies to the distribution of wealth: “The little guy needs to have some sort of prop,” says Solyar, and in the world of money, such props are progressive taxation, tax relief, and so on.

Taxation systems have to be carefully balanced, however, or ill-designed systems of tax breaks or subsidies will “corrupt, mislead and disincentivize (taxpayers), encouraging freeloading,” Solyar says.

World-class scientific research and development centers, whose mission is to change the world for the better, are good examples to explain the effectiveness of subsidies. All developed tax systems grant tax relief to such centers, fostering science in the hope that they will generate wealth for the economy. Such support helps to create new jobs, increase GDP, diversify the economy, and enhance future tax collection. In effect, it’s an investment by the state in the future, Solyar says.

However, granting subsidies to powerful industrial and agricultural companies is not always a good idea. Such companies sometimes abuse their positions as major tax payers or employers to wring tax concessions from the state. Of course, if a country wants to support business growth and help companies reach a certain level, granting subsidies is justified, Solyar says.

But all too often subsidies continue long after the company has started reaping rich rewards. “Is it fair to give state support to a company with a multi-million turnover?” Solyar asks.

The situation is further complicated in countries like Ukraine, where some companies try to avoid paying some or all taxes — by dishonest or at best semi-honest means. Changes in the tax legislation tend to affect honest taxpayers the most.

For instance, in November the Ukrainian business community was caught by surprise when the government suggested removing the cap on Single Social Contribution.

“But the state has decided to attack those who are paying their taxes,” Solyar complains.

The message of this move is that “by deciding to pay taxes, you’ve made the wrong choice,” he adds. The domestic taxation system often encourages companies not to pay taxes and the authorities “need to jump in and come up with new tax administration instruments,” Solyar says.

Solyar refuses to say how much in taxes he and his firm pay. However, Solyar says that he pays taxes in his native village of Medvezhe Vushko, near Vinnytsia.

Through his taxes and donations, the village has managed to build a road connecting it to the city, Solyar says. Still, taxes should be a private matter, he says.

“In general, taxes are private information, and we need to make it a part of our culture that such questions are not asked,” he says.

He recalls his taxation courses in Harvard, when he and his fellow students studied the tax declaration of U. S. President Barrack Obama, who revealed it of his own free will, unlike incumbent U. S. President Donald Trump, who is the first president since the early 1970s not to release the information.

“President Trump hasn’t released his tax returns, and he’s getting a lot of criticism,” Solyar says.

His year in Harvard was both challenging and inspiring, and Solyar considers Harvard to have the best law school in the world. Studying in English was not easy, he says, but “the biggest challenge was to recalibrate your brain and make it think in a different way.”

Students at Harvard are taught to “change their brain and challenge the system in those places where it is unjust,” Solyar says. Harvard encourages its students to have more questions than answers, and “they teach you to aim for what is right.”