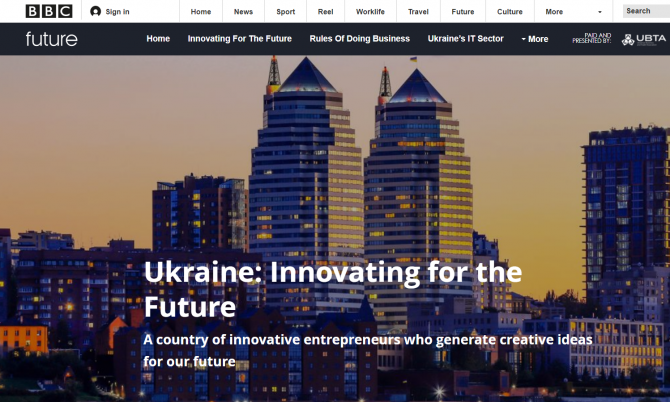 Asters acts as a partner of Ukraine's promotional campaign on the BBC dedicated to the 30th anniversary of Ukraine's independence. The campaign's goal is to form a sustainable positive image of Ukraine worldwide.

The project has four components: an advertising campaign on the bbc.com website, a dedicated web portal about Ukraine, broadcasting a promo video of Ukraine on the BBC Global News in 4 regions of the world, as well as a research on perception of Ukraine by BBC AdScore. The total audience of the BBC Global News counts 121 million people.

Ukraine’s promo campaign on the BBC will run till November 2021. It is expected to reach the world’s financial and business capitals and will be promoted at the key business events in the world. The campaign targets international businesses, potential investors, entrepreneurs, owners of international technology and financial corporations.

“Millions of people around the world will learn about the new Ukraine – a country of innovators, engineers, inventors and creative entrepreneurs shaping the agenda of technological change not only on the national, but also on the regional scale. In cooperation with the BBC editorial team, we are creating a dedicated web portal about Ukraine welcoming partnerships, investments and international projects. Promoting Ukraine’s positive image abroad is one of the six key priorities of our Foreign Policy Strategy”, — said Ukraine's Minister of Foreign Affairs Dmytro Kuleba, announcing the start of the campaign. Dmytro Kuleba also thanked the Ukrainian businesses supporting the campaign.
"Since its establishment in 1995 Asters has been acting as a "bridge" between foreign businesses and investors and Ukrainian business community", - comments Oleksiy Didkovskiy, co-managing partner at Asters. "That's why it is a logical step for our Firm to join efforts with the other leading Ukrainian companies and the state in the project aimed at Ukraine being associated worldwide with technology and innovation, new business opportunities, and investment prospects."

Campaign's creative partners are Saatchi & Saatchi Ukraine and the team of Ukrainian videographer Nazar Dorosh. The project is implemented by the Ukrainian Business and Trade Association in partnership with Asters, Biosphere Corporation, Depositphotos, DTEK, Sigma Software Group, Smart Holding and SoftServe supported by the Ministry of Foreign Affairs of Ukraine.

Asters is the largest law firm in Ukraine with offices in Kyiv, Washington D.C., Brussels and London. Chambers Europe 2021 recognizes 23 lawyers of Asters – the largest number of the renowned practitioners in a single Ukrainian law firm.